How to Do One Arm Push Ups for 20 Reps

I typically don’t make new year’s resolutions, but one thing I would love to be able to do is the one arm push up. 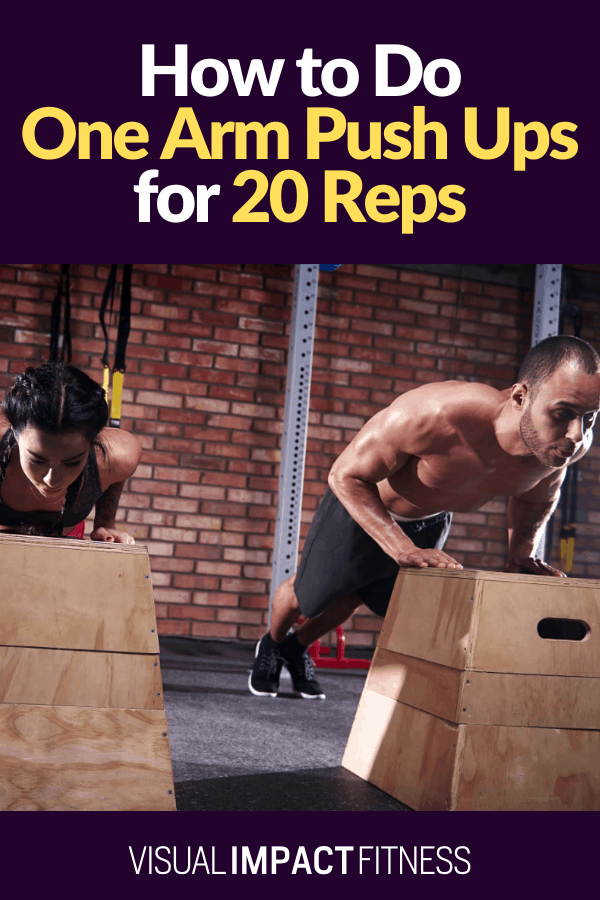 When I first started lifting the big goal was to bench press 225 pounds for reps (because I thought it looked cool to have two 45 pound plates on each side of the bar).

I reached that goal in a short period of time and it felt good, but it is not even close to impressive as doing full-range one arm push ups.

In fact, I would guess there are more guys who can bench press 315 pounds (three 45’s per side) than men or women who can do 5 full-range one arm push ups.

I want to become one of those people.

The Lost Art of “Progressive Calisthenics”

These past two years I have used various body weight circuits as a way to burn fat while maintaining muscle.

This is a great way to condition the body and keep the body fat low, but it is not a way to greatly improve muscle strength using only your body weight as resistance.

Before weight training became mainstream, men and women used their own body weight to get incredibly strong.

In fact, it is believed the Spartans used extensive calisthenics to create extremely powerful bodies and crush their enemies in battle.

These Days When Someone Uses the Term “Calisthenics”…

Up until recently, when I heard the term calisthenics… I thought of Junior High or Elementary School P.E. classes.

I had images of awkward skinny kids with no muscle strength learning how to develop a tiny bit of base muscle (for some reason I think of white “tube socks” with two red stripes when I think of P.E…part of being a 70’s and 80’s kid).

Once these kids became 16-17, they could then move on to something “real” like lifting weights for strength and conditioning. Well, my thinking has changed a bit.

A New Controversial Book That Has Changed My Thinking

Last month, I ordered a book called Convict Conditioning because it peaked my curiosity. I was hesitant to talk about it in detail on my blog…

I just don’t want people to think I am glamorizing crime or think it is cool to “do time” (so I left this part out of the post until now).

That being said, this is by far (by a mile) the best book for gaining strength and muscle with body weight exercises.

In fact, this post is a summary of Coach Paul Wade’s approach to doing one-arm push ups.

He uses 10 steps, to get to the one-arm push up but the idea is the same.

Again…if you can get over the name of the book, you will be pleased with Convict Conditioning. It is right up there with Pavel’s Power to the People… which is probably my all-time favorite fitness book.

Why the Military Focuses Heavily on Calisthenics

As I mentioned before the Spartan warriors used calisthenics to create powerful bodies made for combat.

So as far back as ancient times men and women were using calisthenics to create amazingly powerful and functional bodies.

Calisthenics creates a “combat ready” body that is much more mobile and functionally powerful than a body that is created with nothing but weights.

This is a big reason that it is such a big part of military training.

I am all for lifting weights, but to become truly physically impressive… I believe that some body weight work needs to be included in your routine along with weights.

Using “Progressive Calisthenics” to Do One Arm Push Ups

The mistake most people make when attempting to learn one arm push ups is that they hop right to the actual movement.

Many people will start by attempting one-inch one arm push ups and then gradually increase the range of motion and then attempt two, etc.

This is not what progressive calisthenics is all about!

Progressive Calisthenics is starting with a super easy related movement, mastering that movement… then moving on to a slightly “progressively” harder version of the movement.

Here’s a Sample Exercise Progression to One Arm Push Ups

1) Push Ups Against a Wall: Stand 2-3 feet away from the wall and slowly push your body away from the wall. Once you can do this for 3 sets of 20 reps, you are ready to master the next progressively harder movement.

2) Push Ups on Your Knees: Get on your knees and do push ups at a slow pace. One second down, slight pause at bottom…then one second up. Master this movement for 3 sets of 20 reps before moving on to the next level of difficulty.

3) Push Ups With Feet on Floor and Hands on Bench: The higher the bench, the easier this is. A standard bench in the gym works well, or a chair at home. Master this movement for 3 sets of 20 reps before moving on to the next movement.

4) Full Regular Push Ups: This one is self-explanatory. Just focus on good quality push ups, all the way down in a controlled manner. Same deal, move on to next exercise once you can get 3 sets of 20 reps.

5) Close Grip Push Ups (Hands Touching): I like to make my hands form a diamond shape, like the guy in the first picture. Some people in a triangle. Just make sure your fingers are touching and you will be good. Once you can get 3 sets of 20 reps in perfect form, then move on.

6) One Arm Assisted Push Ups With Basketball: You can use a medicine ball if you have that available as well. What you are going to do here is put as much weight as possible on the hand that is on the ground and another hand on a basketball. Use the had on the basketball to assist you on the way up and the way down. As you get stronger, place that basketball further out to the side of your body away from the center. The further out the ball gets from your body, the less you can assist that working arm. Once you can do 2 sets of 15 reps per arm with very little assistance, it is time to move on to one arm push ups unassisted.

7) One Arm Push Ups: Your goal here is to eventually have the ability to do 20 full strict one arm push ups on each arm. If you can do that, you will have triceps as hard as a rock. If you mastered the previous movement correctly, you should be able to do 3-5 reps on each arm. Over a period of months, you will work your way up to 20 reps per arm.

[This guy is using decent technique, but could improve a bit by getting his feet closer together and tucking his elbow into the side of his body. This increases the range of motion and makes the movement more difficult to perform.]

A Weighted Exercise That Will Help

I have been doing an exercise called Renegade Rows that have increased the muscle density on my obliques without increasing the size of that muscle.

This is great for “framing” your six pack and creating not just great abs, but all the detail muscles of the mid-section.

This exercise also tends to make any pushing exercise much easier over time, due to having to support so much weight with one-arm.

The great thing is that it strengthens the core tremendously for push ups. When doing one arm push ups you don’t want your body to twist and turn due to weak obliques.

This is the exercise you will want to do to ensure this doesn’t happen.

Some Other Tips on One Arm Push Up Progression

The best way to ensure that you reach the point where you can do one arm push ups unassisted is to make sure and really master the previous movements before moving on.

The more time you spend mastering the previous movement, the easier time you will have with the next movement.

I would suggest you start with an exercise that you can easily do… and spend a week or two on that movement before moving on the next movement.

As an example, I plan on spending 2 weeks doing the “feet on floor hands on bench” push up before moving on to full push ups.

This will be easy, in fact, the next level won’t be hard either.

This approach works well because you are teaching your body to progress successfully to the next high-demanding movement… you are training the habit of success.

If you jump too quickly to the harder movements you will get stuck at some point.