How Much Muscle is Ideal for Your Body Type

My entire philosophy is to avoid excessive muscle mass. 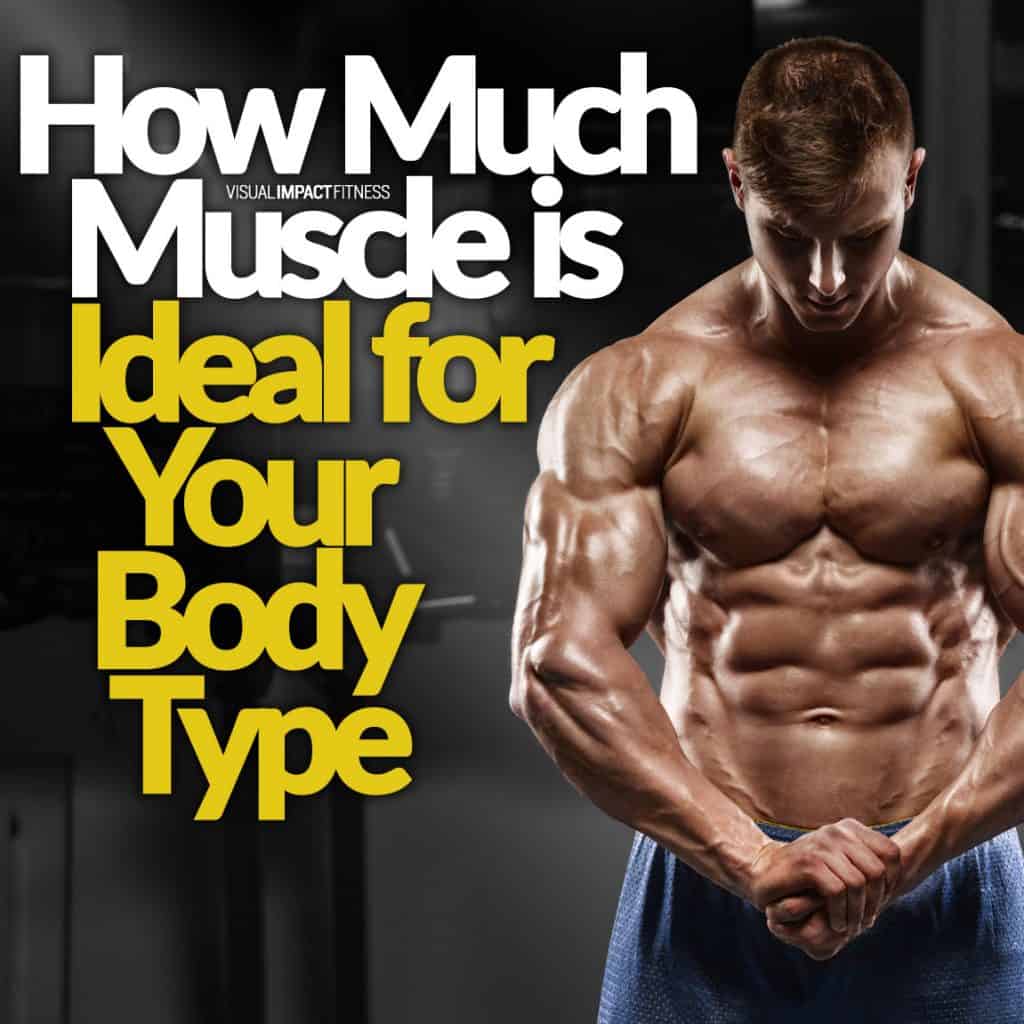 I believe in a physique of average size, but with outstanding muscle tone.

Well, I know beyond a shadow of a doubt that there are guys who do want to add a bit more muscle, but they don’t want to look sloppy in the process.

Training for Function Typically Is The Way to Ideal Physique

When I say train for function, I am not talking about just strength. I mean overall function. The ability to lift heavy and to run a few miles as well as perform sports at a high level.

To perform at your highest level, you simply can’t have a lot of muscle mass.

Think Navy Seals because these guys are lean for a reason.

If they were big and muscular guys, they would be slow and ineffective… they are not. These guys are about as bad-ass as they come!

I realize that there are many younger guys who want to put on some mass in a hurry.

This is fine, but you will want to avoid two things.

One, don’t put on a bunch of fat in the process.

Two, don’t get caught in the trap that you need to get bigger and bigger.

When you add a lot of fat to your body along with the muscle, your face loses that angular handsome look.

Also gaining muscle is kind of addicting and for some reason, it is easy to get caught in the trap that you never feel big enough.

Gaining Your First 10-20 Pounds of Muscle is Easy

If you are a younger guy (17-22) who are just beginning to train, you are going to quickly get results. What will happen is that you will put on 10 to 20 pounds of muscle your first year if you are trying to gain muscle mass.

This obviously differs with each individual, but this first 10-20 pounds is the muscle your body was meant to have in my opinion.

These days we live a sedentary lifestyle for the most part.

This first surge of muscle growth is what you probably were meant to have if we were still “hunters and gatherers”.

This is not excessive muscle.

Guys with bigger frames may even put on 20+ pounds of muscle quickly when they first workout. This is not excessive muscle either.

A guy like The Rock is naturally going to be bigger than Brad Pitt, neither of them has excessive muscle, they have about the right amount for their body types.

After That Initial Surge of Muscle, Gains Slow Down Substantially

When it becomes excessively hard to gain muscle, this is when you should focus on strength and performance.

After you gain that natural amount of muscle mass, from this point forward, try to gain strength without getting bigger.

This is what will refine those muscles and give you a really sharp look.

You will want to focus more on cardio as well. As you become stronger over the years, you will display more and more muscle tone.

I remember taking a trip to San Diego when I was younger and I saw a gentleman in the Coast Guard who had to be 50 years old.

The guy was about 6 feet tall and probably no more than 180 pounds. To this day, he had the most visually impressive physique I have ever seen.

When you train for mass you do want to get stronger, but you have to focus on volume as well. Have you ever seen some of the lighter weight classes in an Olympic Lifting?

These men and women concentrate on getting stronger without putting on mass.

They do this by diet, but they also must keep their volume and reps low so they don’t go up to a higher weight class.

When you train for mass, you must train for volume and you have to keep your reps in the 6-12 range for the most part.

So to train for mass, you want to get stronger and more proficient in the 6-12 reps range, stay away from the low reps.

The lower reps are useful for tone and muscle density, once you have achieved the level of muscle mass you desire.

Eating for Muscle Mass – This is Where it Gets Tricky!

Don’t get me wrong, it is really easy to eat a ton and gain muscle mass, the tricky part is gaining muscle without gaining too much body fat.

I am not a big fan of eating six times per day, but it is a proven way to put on muscle mass.

So let’s talk calories: A general rule of thumb is 18 calories per pound if you want to gain muscle mass.

How Much Protein Per Day for Gaining Muscle Mass?

This is the most discussed subject in bodybuilding circles. Studies have shown that a “natural” athlete can only digest around 1 gram per pound of bodyweight per day.

It is actually closer to .8 grams per pound, but 1 gram is easier to compute.

So that same 180-pound athlete would need to eat 180 grams of protein per day to gain mass.

This probably sounds low to a lot of people.

Keep in mind that bodybuilding magazines get a huge amount of revenue from supplement sales in the form of protein powders, amino acid tablets, meal replacement powders, etc.

I have no incentive to give you false information, I have researched this in depth and this really is a good place to start as far as protein goes.

How Many Calories and How Much Protein Per Meal?

Here is where eating strategically will pay off big time for you.

A really basic way of eating would be to eat 6 meals of 30 grams of protein and 530 calories. I don’t think this is the best way to go.

I would recommend eating your largest meals in the morning and right after your workout.

Your body has been in a fasted state all night, so it makes sense that you would be able to get away with more calories in the morning.

You also have a window of opportunity right after your workout where you can utilize more protein and calories.

The One Hour Window of Opportunity After You Workout

For gaining muscle mass, this is your most important meal of the day by far. You want to eat or drink a quick absorbing protein source right after your workout.

You actually want to eat some sort of High Glycemic carbohydrate as well. You basically want to get quick digesting nutrients into your body as quickly as possible after your workout.

Your muscles will absorb a lot more nutrients than normal during this period of time.

This will really help ensure that your muscles recover quickly and help you during your upcoming workouts.

Avoid any form of fat during this post-workout meal as it will slow down the absorption of the nutrients into your bloodstream.

This is a great time for a big protein shake mixed with fruit juice. I used to mix vanilla protein powder with lime juice, non-fat milk, and a few graham crackers.

Eat Less Protein and Calories During Other Meals

So you want to start your day off strong with a decent amount of calories and protein and eat a large amount of quick digesting protein and carbs after your workout.

You will need to reduce the calories you eat per meal during the day as the protein you eat.

As far as carbs go, you want to eat fibrous and starchy carbs and healthy fats along with every meal to balance out your blood sugar.

The only time you want to eat high GI carbs like simple sugars is right after your workout.

This sounds counterintuitive, but it is actually a good time to eat something along these lines right after your workout (if you are trying to put on mass).

A better way to go is to get a high-quality vanilla protein powder and mix it with fruit juice.

Keep Cardio to a Minimum During This Short Period of Time

Don’t drop cardio out of your workout completely, but once or twice a week is probably fine.

Also, don’t do cardio and your lifting on the same day or in the same workout (this is a great way to burn body fat, but a bad approach to gain mass).

When you want to gain mass, leave the gym quickly with the goal of getting that post-workout quick absorbing meal or shake.

Once you gain that muscle mass, then you will want to really focus hard on cardio.

The ideal situation to putting on muscle mass quickly is to just do this in short 3-4 month “spurts”.

Workout for mass for 3-4 months and then make sure to get to lean (1-2 months) to see how much of that mass is actually muscle.

You don’t want to do too many months in a row of just gaining muscle because your body fat levels can quickly get out of control.

Also, it has been shown that lean people can put on lean muscle mass quicker than individuals with a higher body fat level (a subject for a future post).

It is in your best interest to take an approach where you alternate getting lean, with putting on mass, because of these two factors.