Standing Military Press Benefits | How to Hit the Correct Muscles 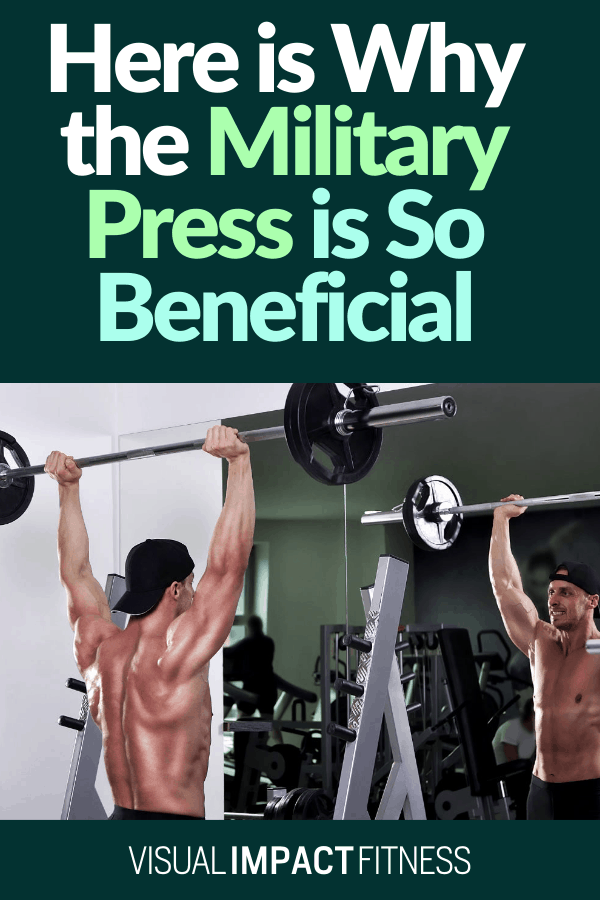 Although this exercise works the heck out of your shoulders, you can do them in a way that works your abs like crazy as well.

Sometimes the best lifts are the ones that appear to be the most basic. Let’s use some advanced techniques to make the most of this basic lift.

A Quick Refresher Course on Generating Strength in a Muscle

Strength is largely determined by your ability to generate tension in a muscle. The harder you can contract a muscle the better strength you can demonstrate in that muscle.

Did you know that you can contract a muscle much harder if you also contract the muscles surrounding it?

Here is how he explains it.

Contract Your Abs to Generate More Power In Your Shoulders

So to generate a higher level contraction in your shoulders and triceps, you should contract your abs. The benefit of contracting your abs also creates a solid base to push from.

What I mean by that, is that if your abs are rock hard while pushing, there won’t be a “sag” effect in your body.

Lifting with “soft abs” is kind of like trying to do shoulders presses on a spring mattress. You will generate much more power if your body is solid and stable.

Flex Your Abs “Bruce Lee Style” for a Power Surge!

I wrote a post on an exercise that Bruce Lee came up with for abs. He also used a similar technique to generate power in his punches.

It is a way of breathing out which also contracts your abs harder than normal.

I named it “Breath of Dragon”, because it sounded like an appropriate name (also because I couldn’t find any mention of this way of breathing online).

The “Breath of Dragon” Explained

First, you want to breathe in. Then you want to simultaneously flex your abs hard while breathing out. Here is the trick…you want to purse your lips and make it a bit hard to force the air out. It should take you about 5-10 seconds to force all of the air out. As you let the air out of your lungs your abs should have the ability to flex harder and harder.

Contracting the Abs, Makes the Lift Safe As Well

Strong ab contractions are going to protect the spine while doing this lift. This is probably the biggest benefit to using this bad-ass “Breath of Dragon” technique.

The huge side benefit is that the better you get at contracting your abs, the sharper they will look (as long as you keep that body fat at a reasonably low level).

I have to honest, over the past 6 months I have been doing seated dumbbell shoulders presses. While they hit the shoulders pretty good, they don’t seem to have the same upper body effect as doing the standing military press.

After doing the standing barbell military presses this past 5 weeks and getting stronger in this lift, all my upper body lifts have become easier.

I have also noticed a big increase in tricep definition. This lift works the heck out your tri’s compared to many other pressing movements.

How to Safely Get the Weight to Pressing Position

Some people like to use a squat rack and put the weight at shoulder level and then un-rack the weight to get it to shoulder position.

This isn’t the way to go in my opinion. If you clean the weight into position it becomes a more functional lift and ensures that your body is balanced.

I’m of the opinion that you shouldn’t try and press anything more than you can clean up to your shoulders.

I also don’t believe in using straps to increase your ability to hoist heavier weights.

The military press lends itself well to “Static Holds”. Here is a great way to finish off your shoulder workout.

Put a little weight on the barbell and press it overhead.

What you will find is that your shoulders will shake and the same thing will happen in your abs.

Once it becomes too tough, put the weight back down. Just do one set.

I like to think of this static exercise as “standing planks”.

It is a static lift that will harden up your abs and increase the mind-to-muscle-link in your shoulders resulting in stronger more defined shoulders as well as stronger and more defined abs.