Why the Old School One Arm Military Press is so Effective

I have recently been toying around with the one arm military press. 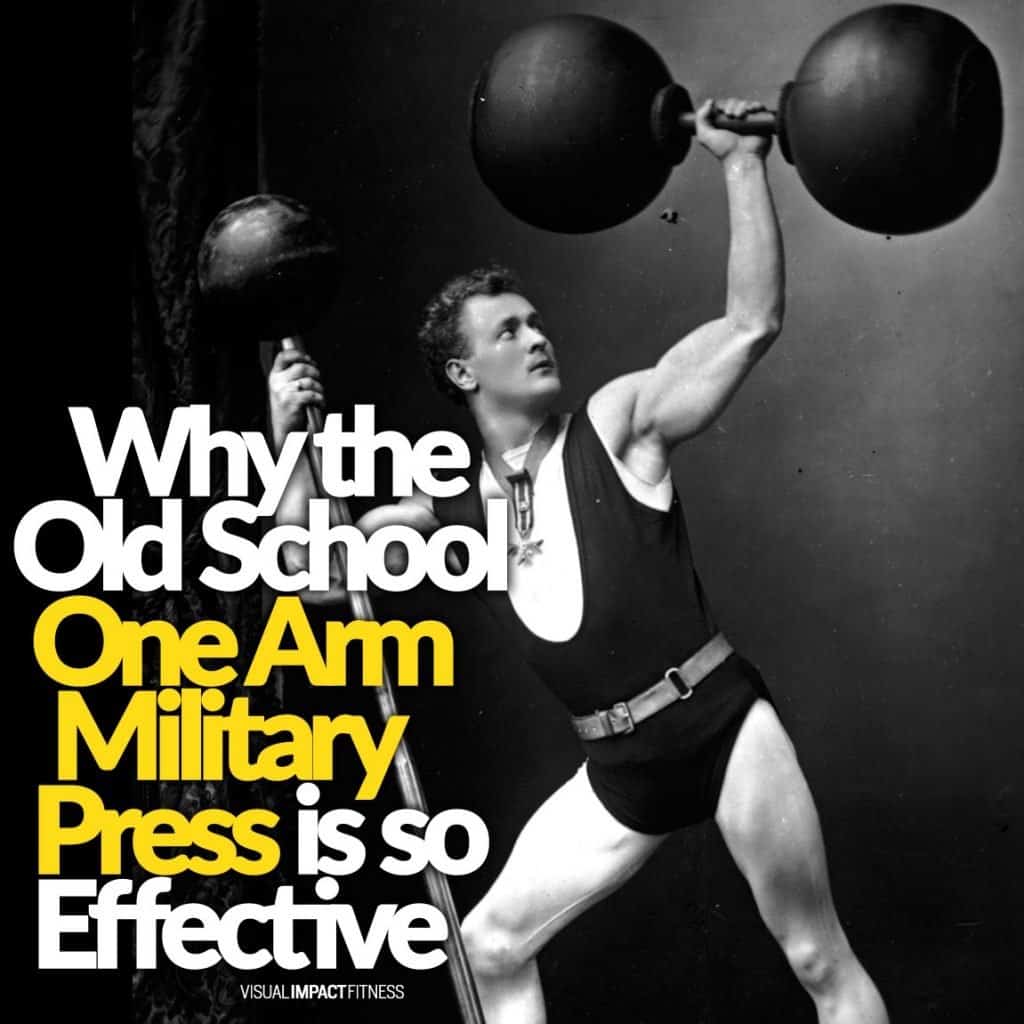 I train shoulders twice per week and I now include heavy one arm military presses every other shoulder workout.

This started by accident a little over a month ago. I was planning to do some seated dumbbell military presses, but all the benches were taken.

I grabbed a set of dumbbells and decided to do just one arm at a time standing (an exercise I’ve never included as part of my routine).

It felt pretty awkward the first set, but really engaged my triceps.

By the 3rd set I was hooked! This creates a much different feel in the shoulders than doing seated dumbbell presses.

After just 4-5 weeks of using this lift all of my weights in my pressing movements have shot up.

No wonder this was such a popular exercise back in the early 1900’s.

You Will Be Able to Use Heavy Weights in This Lift

The seated dumbbell press has been a long time favorite lift of mine for the shoulders.

There is a challenge with this lift however and it is getting the dumbbells into place. I can comfortably get 70-80 pounds up to the starting position, but much past that is a decent effort.

Because of this I haven’t progressed much past 70 pounds for reps.

The one arm military press is a different deal.

It is really easy to get the weight in place. I have no problem cleaning a single 90+ pound dumbbell to shoulder height.

Last week I was doing multiple sets of triples with heavier weights than normal. It was really fun.

I would perform 3 reps with one arm, put the weight on the floor then do 3 reps with the other arm.

I started with 50 pounds and worked my way down the rack. Each time I grabbed a heavier weight, I would put the weight on the ground and psych myself up before each set.

This lift is an interesting one, because the right mindset makes all the difference in the world.

I found an excellent article reprint by Sig Klein from 1937. It is appropriately titled The One Arm Military Press. Sig makes a great point in this article about how to “make the body rigid” before pressing the weight overhead.

“Here is where a little so-called ‘science’ can be used. The elbow is carried back a bit, the handle of the weight must be in line with the chin, and now the athlete can get his back rigid. He contracts his thighs, and at the same time his buttocks. This gives him stability and a firmness which the beginner does not realize is important in all overhead pressing. Here is where the lifter can use discretion as to how he wants to hold his free arm. If he holds it at the side he can, by pressing against his thigh and tensing his arm, give himself rigidness. He can also get almost the same effect by keeping his arm at right angles to the shoulder, and tense his upper back, by pressing it in a downward motion. All this is done by the experienced One Arm Military presser, but it is not apparent. It is just about all the ‘science’ there is to the lift.”

“Making the Body Rigid” AKA Irradiation

So irradiation is basically the ability to improve the strength of a muscle by tensing the surrounding muscles around that muscle. Soviet Special forces trainer Pavel Tsatsouline talked about this in great detail in Power to the People.

I always like to use Pavel’s exact example, because he explains it brilliantly.

The second workout I did with one arm military presses, I was struggling a bit to get 60 pounds moving.

Then I decided to use irradiation in my favor.

I first make a fist with the arm I wasn’t using, let that tension increase across my body and when it hit the side I was lifting with I tightened my grip on the dumbbell and easily lifted it overhead.

Now I simultaneously do this while also tightening my abs. I haven’t tried flexing the legs yet, but I am guessing that will help me reach the next level.

“Before the Olympic lifts became the standard of amateur weight lifters, as far as champion caliber is concerned, the One Arm Military Press was one of the main tests of one’s strength.”

“If an athlete could properly perform a one arm military with 90 lbs. he was considered strong regardless of what he could do on other lifts. All athletes of strength would try their ability at this almost forgotten lift, for it was a lift that could be practiced by all.”

I am much better at pulling movements, but would love to work up to 100+ pounds in this lift.

If you can close in on lifting half of your body weight in this lift, while at a low body fat percentage, I pretty much guarantee that you will have amazing definition in your shoulders and triceps.